Five riparians win MRC writing competition: What does the Mekong mean to you? 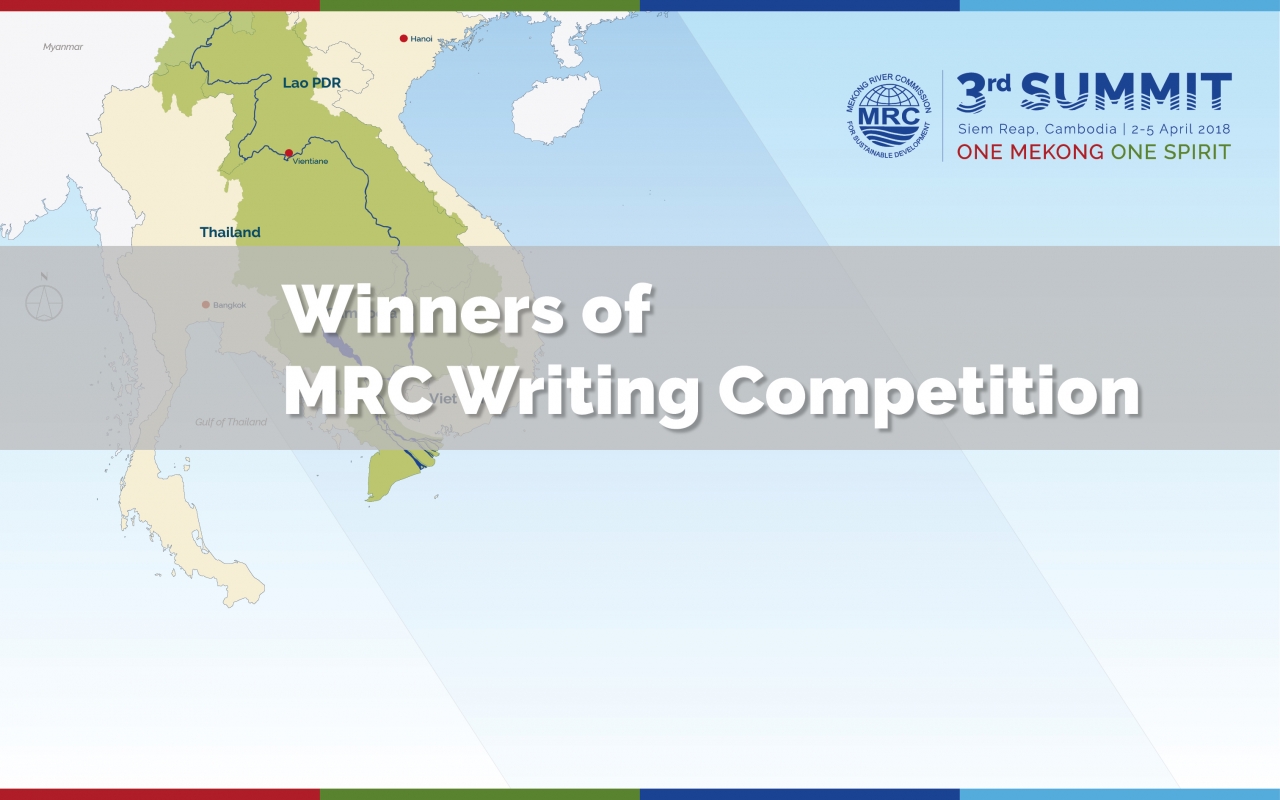 Vientiane, Lao PDR, 28 March 2018 – Today, five Mekong riparians were named as winners of a Mekong River Commission (MRC) writing competition, which had posed the question: What does the Mekong River mean to you?

The five winners were selected from a group of 333 hopeful writers and story tellers who had entered the contest. Cambodian nationals secured the first and fourth place, landing them prizes of US$300 and US$50, respectively. Mekong citizens from Thailand, Viet Nam, and Lao PDR came second, third, and fifth place, respectively, winning US$50 each.

The winners see the river as a unique source of life, love, prosperity, cooperation, and peace.

“The Mekong River is a magical spell to lives. The Mekong, like H20, hydrates the lives below and above the river; like God, promises rains; like fertilizer, dampens the bed of the river with nutrients; like a house, shelters numerous plants and freshwater creatures; and like a freshwater food in a buffet restaurant, feeds millions of mouths,” wrote the first-place winner, Uy Lim Ung, who is an undergraduate student at the Institute of Foreign Languages.

“The Mekong River, the river of life, love, and prosperity. My parents told me a heart-warming story of my ancestors falling in love from across this majestic river. Every day, I witness how tremendously this beautiful muddy river gives to its people along its vast waterway. It calmly and majestically flows silently through our hearts and souls – we call it home,” wrote the second-place winner from Thailand, Avitar Ava Worasit.

“As many other Vietnamese, I hold Mekong River dear to my heart. The River can be described as a caring mother who raises six ‘children’ and cradled many civilizations in the past. Situated at the estuary of the River, we consider ourselves to be her last ‘child’, carrying the hope and dream of the Mother to become prosperous and peaceful,” wrote Bui Ngoc Han from Viet Nam, who won the third place.

“The Mekong River is valuable for me as well as all people in the region. It provides us fresh water and food. It also drives the economy of the region. If the Mekong River countries were the organ of the body, the Mekong river would be blood vessels which connect and feed every organ. Therefore, we couldn’t live without these vessels,” wrote Souliphone Dalavong from Lao PDR, who came fifth in the competition.

While announcing the winners from the MRC Secretariat in Vientiane, MRC CEO Mr. Pham Tuan Phan said he was impressed by the value the contestants placed on the river and the strong connection they had with it:

“From these hundreds of submissions, I’ve seen how valued the Mekong River is and what strong ties people have to it. This clearly shows why we need to work harder together to protect the river and to develop it responsibly and why the MRC has a far more fundamental role to play in the region.”

The writing competition, which ran from 15 February to 15 March 2018, was open to citizens and residents of all ages from Cambodia, Lao PDR, Thailand, and Viet Nam. It aimed to celebrate the Mekong Day – the day when the Mekong Agreement was signed in 1995 – and the 3rd MRC Summit, which is to be held this 4-5 April in Siem Reap, Cambodia. Contestants were asked to submit an entry of no more than 60 words in either English or their native language.

A panel of judges, all from the MRC Secretariat, selected the winning submissions based on a set of criteria, including relevance to the question asked and to the work of the MRC; the catchiness of the text; and whether it was concise and easy to read. After each judge had made their own independent selection, the panel came together to vote for the final five winners. Faced with so many compelling submissions, the panel also selected seven runners-up. Although they will not be awarded any cash prize, the runners-up will receive a certificate of appreciation.

All the 12 winning entries will be displayed at the upcoming MRC International Conference and during the Mekong Day, presented to leaders of the Mekong countries at the 3rd MRC Summit, and featured in other products of the MRC.

This is the first regional writing competition organised by the MRC, and it follows the commission’s first photo contest, which was organised late last year and saw 165 entries from 42 amateur photographers.

An electronic version of the 12 winning entries are posted on the MRC’s Facebook page and website. They can also be viewed here.

Read this news in Khmer, Lao, Thai  or Vietnamese

The MRC is an intergovernmental organisation for regional dialogue and cooperation in the lower Mekong river basin, established in 1995 based on the Mekong Agreement between Cambodia, Lao PDR, Thailand, and Viet Nam. The organisation serves as a regional platform for water diplomacy as well as a knowledge hub of water resources management for the sustainable development of the region.

» Five riparians win MRC writing competition: What does the Mekong mean to you? Back to Top