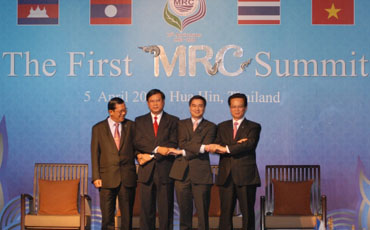 The First Summit, hosted by Thailand in Hua Hin in 2010, was a historic event. It was held on the fifteenth anniversary of the signing of the 1995 Mekong Agreement, and was the first time the leaders of the Governments of the four MRC Member Countries had met under the MRC cooperation framework. The theme of “Meeting the Needs, Keeping the Balance”, symbolized the focus of the discussions, which covered a range of challenges and opportunities facing the Mekong Basin, and the need to manage these challenges through the principle of Integrated Water Resources Management (IWRM).

The Summit, which aimed to strengthen regional cooperation between the Member Countries, Dialogue Partners — the People’s Republic of China and the Union of Myanmar — and other partners, included an International Conference on ‘Transboundary Water Resources Management in a Changing World’.

The First Summit’s ‘Hua Hin Declaration’, issued by the four Mekong leaders, reaffirmed the Member Countries’ commitment to implement the 1995 Mekong Agreement. The Declaration also recognized that the development of water and related resources is vital to the socio-economic development of the region. The Summit also launched the reforms of the MRC, with a goal of making the organization financially sustainable by 2030.

Within a year of the Summit, the MRC Council had approved the IWRM Basin Development Strategy and the MRC Strategic Plan 2011-2015, which directed a range of activities that focused on the priority areas set by the Heads of the four Governments. These achievements provided the impetus for the MRC to expand its work beyond research and the sharing of information, to encompass comprehensive water development and management for the Lower Mekong Basin as a whole.

» 1st MRC Summit Back to Top